Like many keen gardeners, having packed our garden full of plants, we are always finding or reading about new plants that we'd like to grow but we just don't have space for. Everything we grow in the garden borders is chosen to be suitable for cutting but also to put on a good garden display. In addition, we have an area half-way down the garden which is purely dedicated to growing plants for cutting (a mix of annuals, tulips and dahlias). These are housed in a series of raised beds with a wide central path running between them - originally designed to give our children room to zoom up and down on their bikes and trikes when we moved here about 7 years ago. The raised beds are built from railway sleepers and recycled wooden pallets - initially to grow veg in but gradually taken over by me as my passion for growing flowers took off!

When looking at the space, we decided it was time for a remodeling of this area to house as many cutting beds as we could fit in. It wasn't great timing as the raised beds were packed full of spring bulbs and biennials but sometimes you just have to go for it when you have the time. So, it's 'bye-bye' to raised beds with wide paths and 'hello' to more, ground-level beds with smaller brick paths between. We're going to have almost double the planting space which will make room for a rose bed, a dedicated perennial and herb bed, a whole bed of dahlias and lots of space for annuals, foliage and fillers.

We made a start on a Monday at the beginning of February when the sun was shining and it was very spring-like. Once we started digging we were reminded of just why we went with raised beds in the first place - very little soil and lots and lots (and lots) of rubble!

We're leaving one raised bed in place for now as it is crammed full of tulips and I can't bear to lose the flowers this April and May. Everything else growing in the beds has been carefully lifted and temporarily potted up or bagged up. We may lose some flowers this year but, as I keep having to remind myself, it will be worth it in the long run and whatever happens, we will be ready in time for all the annual flowers which will keep us in flowers from June until the first frosts.

Day 3 Erm.. There is an awful lot of rubble to move about and we've found what we suspect are the remains of an old out-house buried under the raised beds on one side. On the plus side, we've salvaged lots of bricks and found a lovely old glass bottle but there's a lot more work than initially thought. There's no going back now though and we're already planning what to plant once it's finished!

Days 4-5 My lovely husband has been working hard all weekend and the garden is gradually taking shape. Some of the old raised beds were quite rotten so our fire pit has come in handy for getting rid of the wood. We've added a gold ring to our collection of finds!

The cutting garden is gradually taking shape. Lots of soil and rubble have been moved around - the rubble relocated under the pathways. Brick paths are being laid - a central wiggly one and some narrower ones dividing the cutting beds into sections. When planning a cutting garden, it's important not to make the beds too wide. About 1-1.2 m is the ideal width so that you can easily reach into the middle of the bed without having to trample the soil.

Days 8-9 The final paths have been laid, soil has been redistributed and the new cutting area is complete, save for the area where our final raised bed full of tulips, grape hyacinths and scillas has been left until the tulips have come into flower and been cut. Once they are over, we'll carefully lift the bulbs, complete with their foliage and replant them so that the foliage can die down naturally. We'll then be able to demolish that bed.

Day 10 We've started putting in some of the plants that have been languishing in plastic pots and compost sacks. We've lined the edges of the central path with some cuttings of chamomile and we've planted a row of small perennials along the edges of the beds running along the central path. We've used dwarf lavenders, drumstick primulas and Alchemilla mollis (lady's mantle).

Day 11 The new cutting garden is finally complete and is planted up with the bulbs, biennials and perennials from the old raised beds and everything looks really healthy after a dose of rain. I'll give you the low-down on exactly what we'll be growing this year in my next post.

Here are my favourite garden perennials which also make great cut flowers. It was hard to narrow the choice down to just 10 but these are the ones that I really value in my garden. They have to perform in the garden (look good and have a long season of interest) and make excellent cut flowers. If they are also good plants for bees and other pollinators, then all the better! 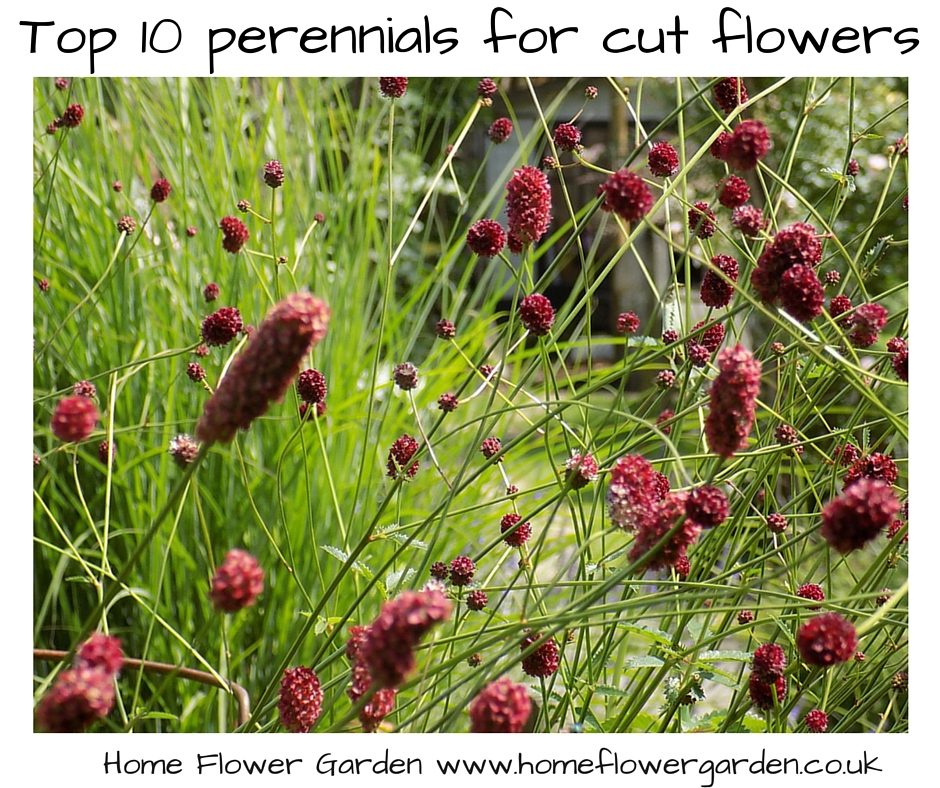 3. Fennel (Foeniculum vulgare) - The yellow umbels of flowers are great as fillers in a vase and I love the height that fennel adds to a garden border. The hoverflies adore it. We leave the expired flower stalks on the plant over winter for sculptural interest.

4. Perennial wallflower (Erysimum 'Bowles' Mauve') - Ours flowers on and off practically all year round (I used the flowers in my Christmas wreath last year!) A very important food source for pollinators as it is so long flowering.

5. Red campion  (Silene dioica) - A pretty wildflower that will grow well in shade so it is possible to have flowers for cutting in shady spots. With deadheading, it flowers all summer long and adds a natural look to a vase of flowers

6. Masterwort (Astrantia) - Another perennial that is happy in shade. It has beautiful architectural flowers that last well in the vase and can be dried.

7. Oregano (Oreganum vulgare) - Great for cooking but it is the lilac clusters of flowers that I value. They are great filler flowers for arrangements and the foliage is a lovely fresh green colour.

8. Oxeye daisies (Luecanthemum vulgare) - Can be a bit rampant as will self-seed everywhere but seedlings are easily pulled out. We have established clumps that flower in early summer for months. Will produce a 2nd flush of flowers later in the year if you cut them back after flowering. Long-lasting in the vase.

9. Giant scabious (Cephalaria gigantea) - You need space in the border for this large perennial but it produces gorgeous, large lemon yellow flowers. They are a mecca for bees and each flower can accommodate up to 4 bees at a time, as I  have been witnessing this summer!

10. Burnet (Sanguisorba) - I love the red bobble headed-flowers of this plant which wave about on top of wiry stems. Long flowering all through the summer and adds interest to a vase of flowers giving it an individual feel.

For more information on creating your own cutting garden from choosing which perennials, annuals, shrubs and bulbs to grow, to planning the layout, sowing seeds, harvesting and arranging cut flowers, please contact Jane about attending a 'Grow your own cut flowers' workshop.

The tulips and other spring bulbs in the garden are just coming to an end as we approach mid-May. The warm weather has finally arrived and there are so many flower buds forming in the garden. Biennials such as Honesty, Sweet Williams and Sweet Rocket all come into their own this month. They are invaluable flowers to have in the garden in order to plug the gap between the end of the spring bulbs and the beginning of flowering of hardy annuals. Hardy annuals sown in the spring will start to flower towards the end of this month or early in June, depending upon when you sowed them (and your geographical location).

Many garden perennials also start to flower this month. I have Red Campion which is a great wild flower. It will happily flower in the shade and produces flowers throughout the summer.  Aquilegias provide welcome flowers now and will self-seed throughout the garden. My mixed hedge is a good source of flowers. The tiny white flowers of Hawthorn are known as the May flower and look lovely in the vase. Viburnum oplus has white flowers that look a bit like lace-cap hydrangeas and Viburnum lantana has flat clusters of tiny white flowers. Cut them all just as the buds are opening to last as long as possible and split the stems of these woody plants to help with water uptake.

The first Alliums are just breaking out of their buds and will flower throughout May and June. I love the large fire-work flowers of Allium christophii planted along with the smaller intense purple A. purpureum and  white A. nigrum. The seed heads can be dried for fantastic displays later in the year.

Oxeye daisies can be a bit rampant but seedlings are easily pulled out from the soil if they stray too far. These beautiful daisies make lovely meadow-style arrangements at this time of year and if you cut them down after flowering, they will produce a second flush of flowers in the autumn.

The perennial wallflower Erysimum 'Bowles' Mauve' is a must for any cutting garden as it flowers practically year-round and is the best food source for bees. In the shady part of the border, I have some Tellima grandiflora which has thin spires of tiny green, fringed flowers, hence its common name of 'Fringe cups'. The flowers add some height to a flower arrangement while the fresh green leaves can be cut and used to soften the neck of a vase.

Nigella (Love-in-a-mist) is another flower that I wouldn't be without and, like many biennials, it self-sows really well. Leave lots to go up to seed and you won't ever have to buy any more seed! It has fabulous looking seed pods that can be collected and used both fresh and dried in displays.

The final buds ripening in my garden are those of my climbing Rose 'Open Arms' which I cut throughout the summer and autumn. I find that it doesn't suffer from the dreaded black spot common in some roses. This year we have planted more climbing roses to scramble through the hedges on either side of the garden. Climbing roses are wonderful for repeat flowering all through the summer.

May has also seen the very first pupil through the door for my 'Grow your own flowers' workshop. It was a lovely day and we had fun arranging tulips with foraged Cow Parsley and cuttings from the garden - Forget-me-nots, Euphorbia, Tellima foliage, Erysimum, Hawthorn and Primroses. It's not too late to take a workshop and get started on growing your own this summer!

Any cookies that may not be particularly necessary for the website to function and is used specifically to collect user personal data via analytics, ads, other embedded contents are termed as non-necessary cookies. It is mandatory to procure user consent prior to running these cookies on your website.